Hot Topics
Half a Million Catholics at Risk of Imminent Schism Due to the Liturgy
Who Are Qatar’s Christians? They Are More than 13% of the Population, but Without Full Religious Liberty
Jesuit Resigns from Vatican Secretariat for the Economy and Is Succeeded by a Spanish Layman
Russia Accuses Pope of Russophobia after His Statements to a Jesuit Magazine
China’s Response to the Holy See’s Protest: “China Is Prepared to Work with the Vatican”
Cardinal Joseph Zen Ze-kiun, Bishop Emeritus of Hong Kong, Receives Sentence from the Chinese Communist Government
China Defaults on Agreement with the Vatican One Month after “Renewing” It
How Will Jesus Come and How Can We Recognize and Welcome Him? Pope’s First Advent 2022 Reflection
Russia imprisons two priests. Ukrainian bishop intercedes on their behalf
Pope’s Three Guidelines to the International Theological Commission

Below is the Vatican-provided text of the address delivered by Pope Francis today at the International Meeting of Prayer for Peace: “No one is saved alone. Peace and Fraternity” at the Church of Saint Maria in Aracoeli.

In an exclusive interview with ZENIT in Rome, the President of the Community of Sant’Egidio, Marco Impagliazzo, gave words of encouragement and comfort before the Pope’s visit. The event is promoted by the Community of Sant’Egidio (presided over by Impagliazzo). Every year, the Meeting recalls the historic Day of Prayer for Peace convoked in Assisi by St. Pope John Paul II in 1986, with representatives of all the world religions.

Here is the address of the Holy Father:

It is a gift to pray together. I greet all of you cordially and with gratitude, especially my brother, His Holiness Ecumenical Patriarch Bartholomew, and dear Bishop Heinrich, President of the Council of the Evangelical Church of Germany.

The passage from the account of the Lord’s Passion that we have just heard comes shortly before Jesus’ death. It speaks of the temptation he experienced amid the agony of the cross. At the supreme moment of his sufferings and love, many of those present cruelly taunted him with the words: “Save yourself!” (Mk 15:30). This is a great temptation. It spares no one, including us Christians. The temptation to think only of saving ourselves and our own circle. To focus only on our own problems and interests, as if nothing else mattered. It is a very human instinct, but wrong. It was the final temptation of the crucified God. 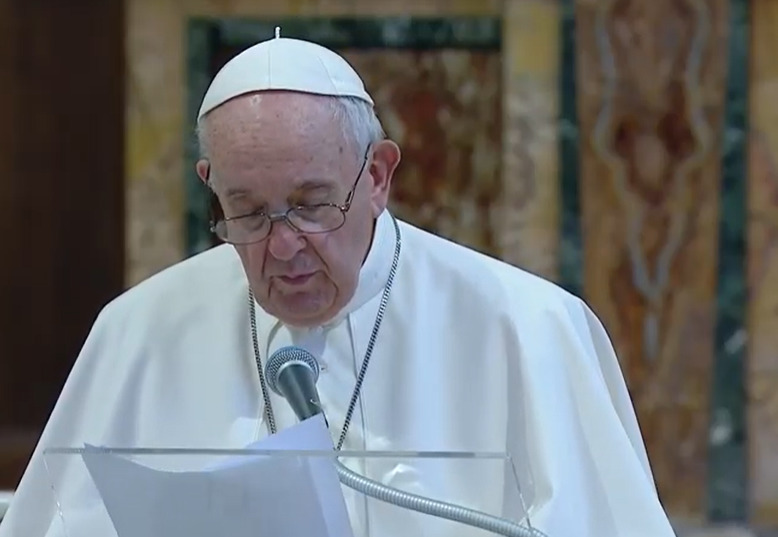 Save yourself. These words were spoken first “by those who passed by” (v. 29). They were ordinary people, those who had heard Jesus teach and who witnessed his miracles. Now they are telling him, “Save yourself, come down from the cross”. They had no pity, they only wanted miracles; they wanted to see Jesus descend from the cross. Sometimes we too prefer a wonder-working god to one who is compassionate, a god powerful in the eyes of the world, who shows his might and scatters those who wish us ill. But this is not God, but our own creation. How often do we want a god in our own image, rather than to become conformed to his own image. We want a god-like ourselves, rather than becoming ourselves like God. In this way, we prefer the worship of ourselves to the worship of God. Such worship is nurtured and grows through indifference toward others. Those passers-by were only interested in Jesus for the satisfaction of their own desires. Jesus, reduced to an outcast hanging on a cross, was no longer of interest to them. He was before their eyes, yet far from their hearts. Indifference kept them far from the true face of God.

Save yourself. The next people to speak those words were the chief priests and the scribes. They were the ones who had condemned Jesus, for they considered him dangerous. All of us, though, are specialists in crucifying others to save ourselves. Yet Jesus allowed himself to be crucified, in order to teach us not to shift evil to others. The chief priests accused him precisely because of what he had done for others: “He saved others and cannot save himself!” (v. 31). They knew Jesus; they remembered the healings and liberating miracles he performed, but they drew a malicious conclusion. For them, saving others, coming to their aid, is useless; Jesus, who gave himself unreservedly for others was himself lost! The mocking tone of the accusation is garbed in religious language, twice using the verb to save. But the “gospel” of save yourself is not the Gospel of salvation. It is the falsest of the apocryphal gospels, making others carry the cross. Whereas the true Gospel bids us take up the cross of others.

Save yourself. Finally, those who were crucified alongside Jesus also joined in taunting him. How easy it is to criticize, to speak against others, to point to the evil in others but not in ourselves, even to blaming the weak and the outcast! But why were they upset with Jesus? Because he did not take them down from the cross. They said to him: “Save yourself and us!” (Lk 23: 39). They looked to Jesus only to resolve their problems. Yet God does not come only to free us from our ever-present daily problems, but rather to liberate us from the real problem, which is the lack of love. This is the primary cause of our personal, social, international, and environmental ills. Thinking only of ourselves: this is the father of all evils. Yet one of the thieves then looks at Jesus and sees in him a humble love. He entered heaven by doing one thing alone: turning his concern from himself to Jesus, from himself to the person next to him (cf. v. 42).

Dear brothers and sisters, Calvary was the site of a great “duel” between God, who came to save us, and man, who wants to save only himself; between faith in God and worship of self; between man who accuses and God who excuses. In the end, God’s victory was revealed; his mercy came down upon the earth. From the cross, forgiveness poured forth and fraternal love was reborn: “the Cross makes us brothers and sisters” (BENEDICT XVI, Address at the Way of the Cross at the Colosseum, 21 March 2008). Jesus’ arms, outstretched on the cross, mark the turning point, for God points a finger at no one, but instead embraces all. For love alone extinguishes hatred, love alone can ultimately triumph over injustice. Love alone makes room for others. Love alone is the path towards full communion among us.

Let us ask the crucified God to grant us the grace to be more united and more fraternal. When we are tempted to follow the way of this world, may we be reminded of Jesus’ words: “Whoever would save his life will lose it, and whoever loses his life for my sake and the Gospel’s will save it” (Mk 8:35). What is counted loss in the eyes of the world is, for us, salvation. May we learn from the Lord, who saved us by emptying himself (cf. Phil 2:7) and becoming other: from being God, he became man; from spirit, he became flesh: from a king, he became a slave. He asks us to do the same, to humble ourselves, to “become other” in order to reach out to others. The closer we become to the Lord Jesus, the more we will be open and “universal”, since we will feel responsible for others. And others will become the means of our own salvation: all others, every human person, whatever his or her history and beliefs. Beginning with the poor, who are those most like Jesus. The great Archbishop of Constantinople, Saint John Chrysostom, once wrote: “If there were no poor, the greater part of our salvation would be overthrown” (On the Second Letter to Corinthians, XVII, 2). May the Lord help us to journey together on the path of fraternity, and thus to become credible witnesses of the true God.