(ZENIT News – Aid to the Church in Need / Owo, Nigeria, 15.06.2022).- Father Andrew Adeniyi Abayomi is the assistant parish priest of Saint Francis Xavier church in Owo, state of Ondo, Nigeria, which suffered a terrorist attack during the Mass on Pentecost Sunday, June 5. The massacre left at least 41 faithful dead and dozens seriously wounded. Father Abayomi recounted his experience that day and the consequences of the slaughter to Aid to the Church in Need. Here is the interview in English.

Question.- How many attackers were there?

Answer: I didn’t see them, but according to eyewitnesses there were four, whereas others said that, in addition to the four, there were some among us in the church. The real number is unknown.

Question.- Where were you when the attack happened?

Answer: I was still in the church. The Mass had ended and I was putting incense in the censer, preparing for the procession to leave the church. It was then  that I heard a noise. Then I heard a second loud noise and I saw the faithful running in different directions in the church. I was astonished, wondering what was happening, when someone ran up to me, shouting: “Father, unknown gunmen!”

Question.- Did you fear for your life?

Answer: I wasn’t fearing for my life, I was thinking how I could save my faithful. I urged the people to go to the sacristy. Some of the faithful fled from there. I couldn’t run because I was surrounded by children, while some adults were hanging on to me. I protected them as a chicken protects her chicks. I heard the voices of my faithful: “Father, please save us!”  I heard three or four explosions, one after the other. The whole attack was well planned and lasted 20-25 minutes. 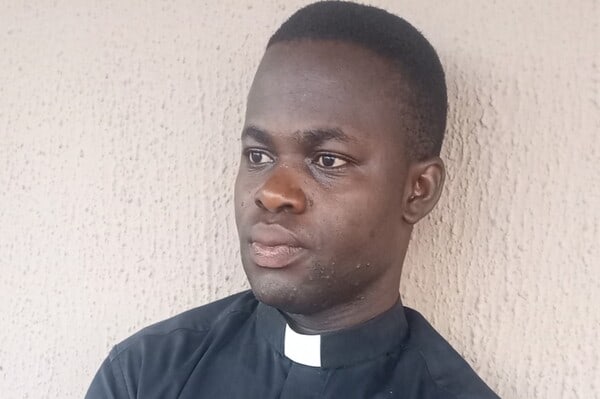 Answer: We were told that the attackers had left. We came out of the sacristy and I saw that some of the faithful were dead, whereas  many of them were wounded. I implored the people to take our wounded brothers and sisters to hospital. I started to take some of the wounded to Saint Louis Hospital  and to the Federal Medical Center. We left the corpses in the church while we tried to rescue the wounded.

Question.- Up to now the state of Ondo has been peaceful, especially when compared to the North of Nigeria and the Middle Belt, despite some tensions between the Fulani shepherds and the Christian farmers. How can one explain this sudden outburst of violence?

Answer: We’ve heard that the militant  groups are mobilizing the people in the Southwest and in other parts of the country. We can’t identify the tribe, race or group to which the attackers belong. Although while the attack was going on, some saw them but were unable to identify them because they weren’t talking. During the Mass, some of the attackers disguised themselves as faithful.

Question.- What are the greatest needs at this time?

Answer: We need material and financial support to take care of the victims and the survivors. We also need a security strategy. The security personnel and the police of the surroundings did not come to our rescue, despite the fact that the attack lasted 20 minutes and four artifacts exploded.

Question.- After such an experience, will the people feel safe to return to the church?

Answer: Fear has entered the mind of some of the faithful. Hence we are determined to keep them strong in their faith and to comfort them. In my meeting with the faithful, I did not see a loss of faith, but a strengthening of it. They are prepared and ready to keep themselves firm.