Mario Enzler had checked the area, making sure it was secure and safe for a most important person who would arrive soon. That was his job as a Swiss Guard, preparing for the Pope’s arrival, the Pope being a future saint, John Paul II.

As always when he was near the Holy Father, Mario hoped the Pope would acknowledge him, maybe say hello or pat him on the shoulder. But he walked right by as if Mario wasn’t even there. Yes, even a stoic Swiss Guard can be disappointed. So Mario closed his eyes to reflect — for only a couple seconds — and when he opened them he was surprised to see the Pope staring directly into his eyes.

“I didn’t hear him come back and there he was, right in front of me,” Mario recalled.  “He was looking at me with those blue eyes, an intensity of blue that I have never seen anywhere else.

“He reached inside his cassock and took out a rosary. He held it in front of me and said, ‘Mario, the rosary is my favorite prayer because of its simplicity and profundity. Take my beads and make them your most powerful weapon.’

“He put the rosary in my hand and left. I put it in my pocket and have kept it with me ever since.” 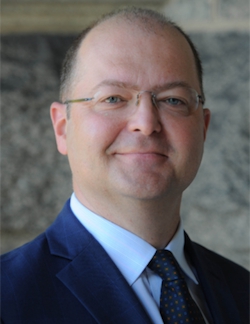 Mario – now Dr. Mario Enzler – has made the rosary his most powerful weapon and says it is an “authentic symbol of masculinity.”

Enzler shared his memories of St. John Paul II in a talk at St. Mary’s Parish, Sycamore, Illinois. Sycamore is a town of some 20,000 residents in north-central Illinois, best known for its annual pumpkin festival. It is home to a vibrant Catholic community and Fr. Carl Beekman, pastor at St. Mary’s, was a seminary classmate of Enzler’s brother-in-law.

The events leading up to Enzler’s encounter with John Paul II would likely be seen as coincidences to a person of little faith, as he admits he once was. But to someone looking back on his life through eyes blessed by faith, those events can only be seen as the gentle interference of the Holy Spirit.

Mario Enzler was born and raised in the small Northern Italian village of Sotto il Monte. His father was Swiss, but worked in Italy, married an Italian, and decided to stay.  Thus, Mario had dual citizenship, Italy and Switzerland.

Ironically, in light of Mario’s later connection to John Paul II, another future saint was born in Sotto il Monte: Pope John XXIII.  Mario had no interaction with that Pope, although he dated a couple of the Holy Father’s nieces as a youth.

Enzler’s youth, he admits, was not an especially holy part of his life.  He enjoyed partying, dating and working as a runway model at fashion shows. Not impressed with this unproductive lifestyle, his father gave him a choice: join the Swiss Army or the Italian Army. The choice would be significant for his future – but also because whichever choice he made would require renouncing citizenship in the other country.

Enzler says the choice was easy: Italian boot camp laster 54 weeks; Swiss boot camp was just 17. So he joined the Swiss Army. And his transition to military life began shortly after he stepped off the train in Geneva and was met by his new sergeant, who pulled out a knife and cut off Enzler’s long ponytail.

After a couple of weeks of training, Enzler decided he needed a break, so he reminded his commanding officer that he was Catholic and needed to go to Mass on Sunday.  His plan was to get a ride into town, then do a bit of “troublemaking” and catch a ride back to the base in a few hours – Mass was not on the agenda.

However, the soldier who picked him up to give him a ride turned out to be a colonel – and a Catholic Priest who was the chaplain. He took him to Mass and asked Enzler to do the readings and act as an altar server. He also had an hour of adoration, so Mario had no opportunity for troublemaking.

We don’t know for certain whether the chaplain saw great potential for Enzler – or just an opportunity for purification – but he recommended the young soldier apply for the Swiss Guard. Shortly after, he was on his way for 40 months of service to John Paul II, a during which he changed from not even knowing who the Pope was to seeing the Holy Father as a model and inspiration for his life.

“The Pope was truly a man, a man with the courage of two thousand men,” Enzler recalled.  “He was a great communicator, deeply intellectual and spiritual, who constantly encourage others to ‘be more.’  His faith wasn’t an emotion but came from personally meeting Jesus. And I wanted to have what he had.”

Clearly, associating with the future saint changed Enzler’s life. He went on to be a husband, father, and banker. He and his wife founded a Catholic academy. And today he is a professor of finance at the Catholic University of America in Washington.

He is still carrying that rosary and offers five pieces of advice from St. John Paul II for those who want to “be more”:

Enzler gave a remarkable example of the grace and patience John Paul II displayed toward others.  It occurred directly in front of him as the Holy Father was returning from a week’s hospital stay for removal of a benign tumor. The Holy Father was a little unsteady and as aides were helping him out of his car (Enzler was at attention at the entrance to the building), the Pope’s aid shut John Paul’s hand in the car door, breaking a couple of fingers. It must have been terribly painful, but the Pope didn’t say of word of rebuke, simply gathered himself and continued.

Enzler had many encounters with John Paul II during his time in the Swiss Guards. Perhaps none was more telling than the conversation he witnessed between the Pope and his secretary in which the Holy Father described a dream he had the previous night in which he was told that he would lead the Church in suffering, that he would show the suffering that one may go through to see the higher promise of the Gospel.

“John Paul II made me a man of hope,” Enzler said. “He showed me how toembrace the whole truth, even when it hurts.”