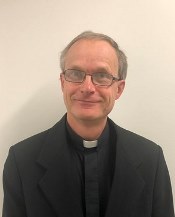 Bishop-elect van Roijen was born in Diemen, the Netherlands on August 4, 1965, and immigrated to Canada at the age of eight with his family. He obtained a Bachelor of Arts degree in Philosophy from the University of Saskatchewan (1986) and a Master of Divinity from the University of Western Ontario (1989). He then pursued teacher training through the Faculty of Education at the University of Calgary (1990-1992) and worked as the Diocesan Director of Religious Education for the former Diocese of Gravelbourg (1992-1995). Following the completion of his seminary formation, he was ordained to the priesthood for the Diocese of Nelson on April 25, 1997. Subsequent to his ordination, he served as pastor in a number of parishes and missions in British Columbia as well as the Diocese of Mackenzie-Fort Smith. He likewise held a number of appointments for the Diocese of Nelson including Vocations Director, Chair of the Priest Council, Director of the Permanent Diaconate Program, and most recently, Vicar General. His episcopal ordination will take place on December 12, 019, at the Cathedral of the Most Holy Redeemer and Immaculate Conception in Corner Brook, NL.

The Diocese of Corner Brook and Labrador has 51 parishes and missions, with a Catholic population of 26,705 served by 26 diocesan priests, nine priests and ten Sisters who are members of institutes of consecrated life.

Jesus looks at the paralytic and focuses on what is essential: "Your sins are forgiven". Physical health is a gift that we must preserve but the Lord teaches us that we must also preserve the health of the heart, spiritual health. #HomilySantaMarta

The Lord has so much compassion, He involves Himself in our problems. Let us often repeat this simple prayer: Lord, I am a sinner, have mercy on me, have compassion for me. #HomilySantaMarta

May the Holy Spirit revive in each of us the call to be courageous and joyful evangelizers. #GeneralAudience