“I am a poor priest and my only richness is Christ,” are the words that his Italian biographer, Mimmo Muolo, retains of Cardinal-designate Ernest Simoni, hero of the Gospel under the Albanian Communist regimes, who endured condemnation to death and was a slave labourer for almost 30 years.

Father Ernest Simoni is the only non-bishop on the list of  17 who will receive the red hat in November.

Tortured and imprisoned at the time of the Communist persecution, his testimony moved Pope Francis to tears during the apostolic visit to Tirana in 2014.

More than 80 years old, Cardinal Simoni will be a non-elector in case of a Conclave.

On announcing his name yesterday, Sunday, October 9, the Pope specified that he chose “a priest who rendered a clear Christian testimony.”

During Vespers in the Cathedral of Saint Paul in Tirana on November 21, 2014, in the presence of Pope Francis, Father Simoni — who will celebrate his 88th birthday on October 18 — recounted his arrest in 1963, after eight years of priesthood. Beaten and tortured because he proclaimed Christ, he spent years in prison and in forced labour until the collapse of the regime in 1990. Becoming the Spiritual Father of numerous prisoners, he celebrated Mass in Latin by heart, distributed Communion and heard confessions secretly. He wrote on the wall of his cell: “Jesus is my life.”

“Today we have touched martyrs,” said Pope Francis after his testimony and that of a woman religious: “With this simplicity, they suffered very much physically, psychically, with the anguish of uncertainty, not knowing if they would be shot or not, and they lived with this anguish. The Lord consoled them. (…) He consoles in the depth of the heart and by His strength.”

Pope Francis saw this elderly priest again during a General Audience last April: he then kissed his hands in sign of respect.

Here is what his biographer shared with Zenit.

ZENIT: Mimmo Muolo, last year you published — in Italian — a biography of the Albanian Franciscan priest that Pope Francis has just chosen to be a cardinal (“Father Ernest Simoni. From Forced Labour to the Meeting with the Pope,”  Pauline Publications 2016): How did the idea come about of this book on Father Ernest Simoni?

Muolo: Paoline Libri publishing house asked me for the book, after my article on the Pope’s visit to Albania, in the course of which Father Ernest’s testimony of his experience made Pope Francis weep.

ZENIT: How did you do it?

Muolo: I met Father Ernest in Florence, where he goes often to visit Albanian faithful of the diaspora, and I stayed two days with him. He recounted his life to me <and> I wrote. That was a great grace for me!

ZENIT: What are the principal stages of his unbelievable life?

Muolo: First of all he had his vocation, in his childhood, when he “played” at celebrating Mass, then his Ordination among a thousand dangers and his first priestly ministry. Then his arrest, and his death sentence commuted to 25 years of forced labour. In the end, he served 28, first in a quarry then in the mines, and finally in the sewers of Scutari – a “martyr” according to the term used by Pope Francis.

ZENIT: Is he a model for the Jubilee of Mercy?

Muolo: Certainly. He is a model of mercy because he always forgave his persecutors.

ZENIT: What can Father Simoni’s role be as Cardinal?

Muolo: Father Simoni is a living witness of fidelity to Christ in all the situations of life, including the most extreme. And as Cardinal, he will also remind us that there is nothing more important than Jesus.

ZENIT: What are your wishes for this hero of the faith so justly named Cardinal?

Muolo: I hope he will continue to spend himself without stopping to proclaim the Gospel until the last moment of this earthly life. It is what he does at present, at 88, with different health concerns.

ZENIT: What question would you like to ask him?

Muolo: I would like to ask him if he ever imagined that one day he would become Cardinal. But I know his reply: “I am a poor priest and my only richness is Christ.” It’s what he has always said to me. And he will say it again now. 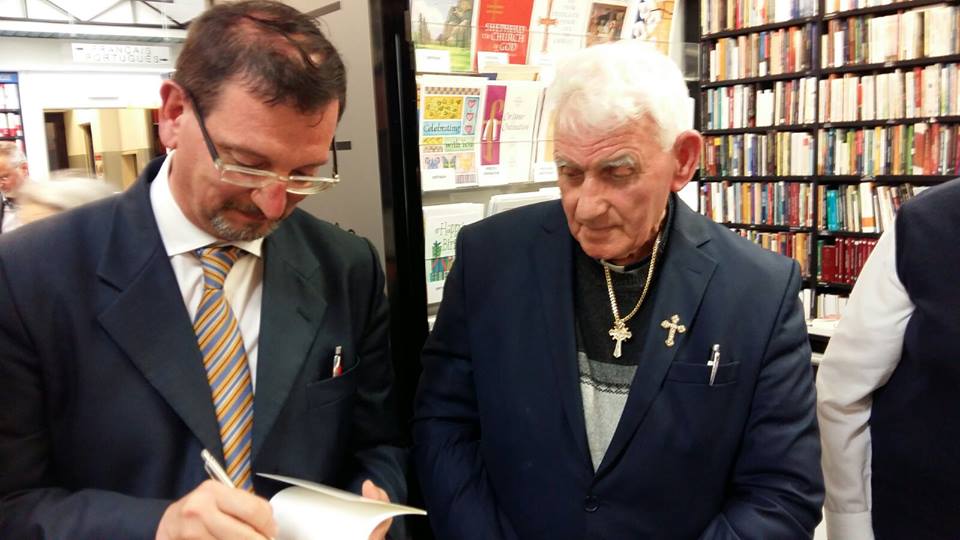 This year I want to dedicate World Communications Day to the theme of storytelling. In order not to get lost, we must make the truth of good stories our own. Stories that build up and help us find our roots and the strength to move forward together. https://t.co/sGHsqR8aeR

Ecumenical hospitality requires a willingness to listen to other Christians, paying attention to their personal stories of faith and to the history of their community.